Oriented bounding boxes are an important tool for visibility testing and collision detection in computer graphics. In this post I want to talk about how to compute the oriented minimum bounding box (OMBB) of an arbitrary polygon in two dimensions. As a polygon just enforces an ordering on a set of points (vertices), everything described in the following equally applies to simple point sets. Minimum in this context refers to the area of the bounding box. A minimum oriented bounding box is also known as smallest-area enclosing rectangle. However, I will stick to the former term throughout this article as it is more frequently used in the computer graphics world.

– coordinates of its vertices. Such an axis aligned bounding box (AABB) can be computed trivially but it’s in most cases significantly bigger than the polygon’s OMBB. Finding the OMBB requires some more work as the bounding box’ area must be minimized, constrained by the location of the polygon’s vertices. Look at the following figure for an illustration (AABB in blue, OMBB in red).

. In the figure below the convex hull of the vertices of a concave polygon is depicted. 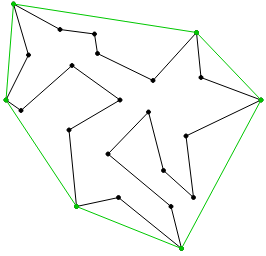 There are numerous algorithms for computing convex hulls: Quick Hull, Gift Wrapping (also known as Jarvis March), Graham’s Algorithm and some more. I’ve chosen the Gift Wrapping algorithm for my implementation because it’s easy to implement and provides good performance in case

is small or the polygon’s convex hull contains only a few vertices. The runtime complexity is

As there are many good articles on the Gift Wrapping algorithm available online, I won’t describe it another time here. Instead I want to focus on the lesser-known Rotating Calipers method for computing OMBBs. However, take care that your convex hull algorithm correctly handles collinear points. If multiple points lie on a convex hull edge, only the spanning points should end up in the convex hull.

Rotating Calipers is a versatile method for solving a number of problems from the field of computational geometry. It resembles the idea of rotating a dynamically adjustable caliper around the outside of a polygon’s convex hull. Originally, this method was invented to compute the diameter of convex polygons. Beyond that, it can be used to compute OMBBs, the minimum and maximum distance between two convex polygons, the intersection of convex polygons and many things more.

The idea of using the Rotating Calipers method for computing OMBBs is based on the following theorem, establishing a connection between the input polygon’s convex hull and the orientation of the resulting OMBB. The theorem was proven in 1975 by Freeman and Shapira1:

The smallest-area enclosing rectangle of a polygon has a side collinear with one of the edges of its convex hull.

To determine the OMBB of a polygon, first, two orthogonally aligned pairs of parallel supporting lines through the convex hull’s extreme points are created. The intersection of the four lines forms a rectangle. Next, the lines are simultaneously rotated about their supporting points until one line coincides with an edge of the convex hull. Each time an edge coincides, the four lines form another rectangle / OMBB candidate. This process is repeated until each convex hull edge once coincided with one of the four caliper lines. The resulting OMBB is the OMBB candidate with the smallest area. The entire algorithm is outlined step by step below.

In practice, in every iteration the smallest angle

between each caliper line and its associated, following convex hull edge is determined. Then, all caliper lines are rotated at once by

Rotating Calipers is a very elegant method for computing OMBBs in two dimensions. O’Rourke generalized it to three dimensions, yielding an algorithm of cubic runtime complexity. However, in practice approximation algorithms are used for three dimensional data because they’re usually faster. Beyond that, it's worth knowing the Rotating Calipers technique as it can be employed with minor changes to numerous other geometric problems. Depending on the programming language the implementation of the entire algorithm, including the convex hull computation, requires merely 150-200 lines of code. My sample implementation in Javascript can be found in my github repository.